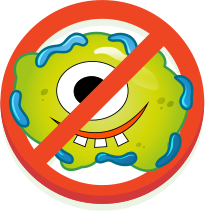 A word from the owner and CEO

The reason I became involved in the disinfecting industry is because of my youngest son. He was diagnosed at eight months of age with a rare chromosomal disorder known as Q4D. Among his numerous health issues, he has a low immune system and is constantly fighting cold and flu viruses. After numerous ER visits for my youngest, and after months of researching about electrostatic disinfection, I purchased my first unit and began to use it in my own home. Over the last several years, my youngest son has not had any ER visits due to viral infections. In fact, we have all been virus free for several years and even my oldest son has received an award the past three years for perfect attendance. I am a walking testimonial that electrostatic disinfecting truly works. Derek Novello Owner/CEO

You clean for appearance, we disinfect for health.

Know the difference... Cleaning removes dirt and grime from surfaces and objects. Cleaning works by using soap or detergent and water to physically remove biofilm from surfaces. Disinfecting is a touchless process that applies environmentally safe disinfectants onto surfaces and objects to kill viruses and bacteria. You don't wipe it off you allow it to dwell on the surface according to the directions on the product label..

To provide a healthy environment in homes and businesses and to keep people safe from harmful viruses and bacteria.